You've got to admit, Waikiki is seriously cool. 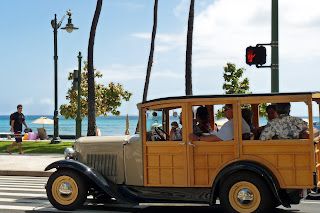 
Al and I went separate ways one day on Oahu so he could do some testosterone touring (spending the whole day seeing the sights at Pearl Harbor), while I took the opportunity to check out three luxury hotels on Waikiki: the Royal Hawaiian, the Moana-Surfrider, and the Halekulani.

This is the third in our series of Hawaii hotels.  The first was the 5-star Kahala (about 15 minutes from Waikiki), followed by the 3-1/2 star Aston Waikiki Beach Hotel, with its great views.  The following three are sort of a cross between the two: they’re luxury hotels, but unlike The Kahala, they’re right in Waikiki. 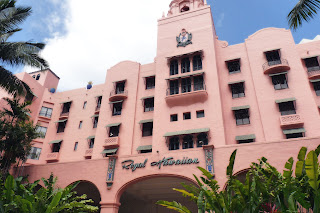 The Royal Hawaiian (a.k.a. “Pink Palace,” a.k.a. “Grand Dame of Waikiki”) was completed in 1927 at a cost of $4 million.  This pink stucco icon of Waikiki Beach is of Spanish-Moorish architecture, said to be influenced by screen star Rudolph Valentino, who was popular at the time.  Early guests of the Royal Hawaiian arrived by sea, often with numerous steamer trunks for extended stays, and sometimes accompanied by servants and even Rolls Royces!  It’s still a nice property, but these days, drivers of Kias are also welcome.  It is, however, a good idea to like pink! 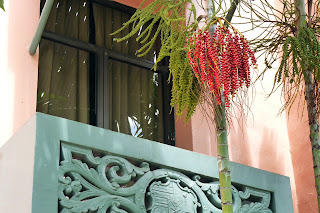 Wonderful architectural details in the balconies
at the Royal Hawaiian 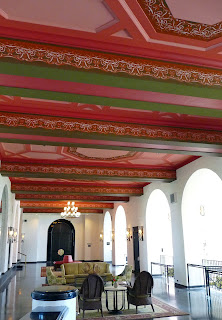 One of the Royal Hawaiian Hotel's open-air lobbies 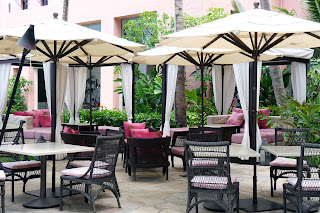 Umbrella tables with wicker chairs at the Royal Hawaiian Hotel 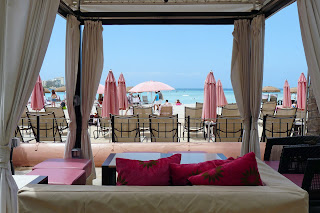 Beach cabana at the Royal Hawaiian 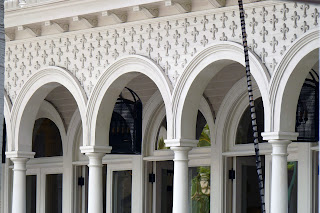 The Royal Hawaiian may be thought of as the Grand Dame of Waikiki, but the title of “First Lady of Waikiki” goes to the Moana-Surfrider, which opened its doors a quarter-century earlier, in 1901.  One of the landmarks at the hotel is the 100+ year old banyan tree in the courtyard.  It’s 75’ high, with a span of 150’.


The hotel was done in a delightful mixture of Old World styles. 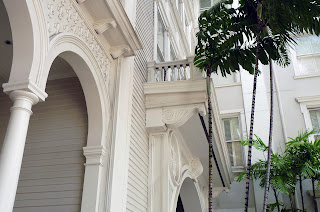 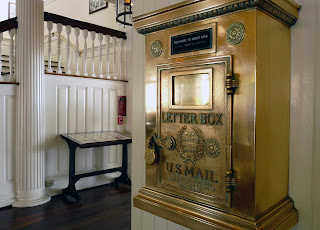 Brass letter box in the lobby of the Moana-Surfrider 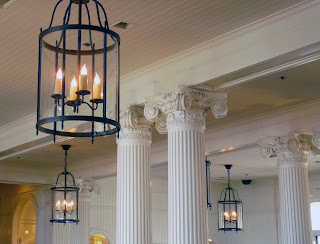 Ionic capitals in the lobby of the Moana-Surfrider 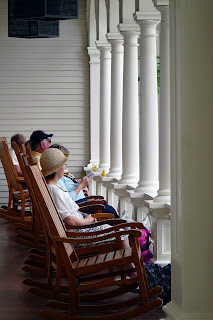 Rest and relaxation on the Moana-Surfrider’s front porch 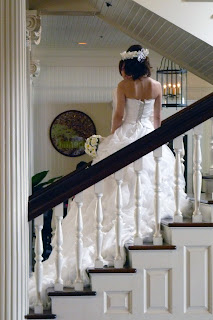 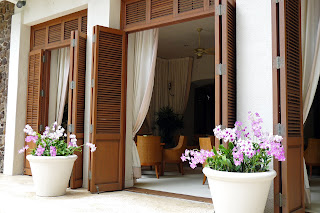 Of all the hotels I stayed at or scouted out on Oahu, The Kahala was the most luxurious and the most secluded.  That seclusion was aided by the fact that it was a 15-minute drive from Waikiki, which may or may not be considered a plus.

If one wanted to be right in the thick of things on Waikiki, but still have the sense of somewhat being away from the throngs of the area, the ScheckTrek pick would be the Halekulani.  One of the things I love about the Halekulani, in addition to its beautiful location and views, is that there are a lot of nooks and crannies and lounges and places to explore—and they aren’t already full of people.  It provides a feeling of space in Waikiki Beach, and that’s saying something! 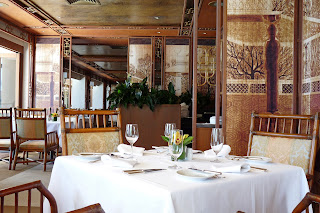 By the time I reached the Halekulani, I was ready for lunch.  By happy serepdipity, I found that Orchids (Halekulani’s all-day restaurant) had closed for remodeling, and La Mer (their AAA 5-diamond restaurant) was serving from Orchids’ menu for lunch.  So while the food was good, it might not have been 5-diamond.  However, the price was less, and my meal was served in a 5-diamond setting—and setting always trumps the food for me!  What a treat it was to eat there! 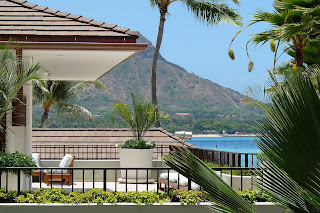 The view from my table at Halekulani’s La Mer 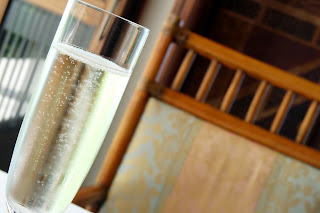 Champagne lunch at La Mer, at the Halekulani 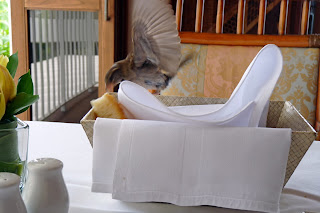 I enjoyed exploring the relatively (this is Waikiki) peaceful grounds of the Halekulani. 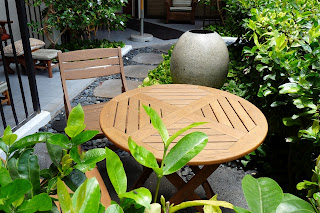 "Hidden" nook at the Halekulani

I assume this private sitting area goes with a ground-floor suite at the Halekulani.  The pottery piece is the fountain you’ll see in the next photo. 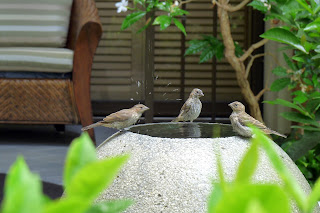 Bathing cuties at the Halekulani 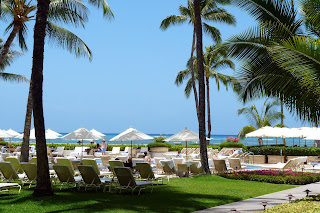 Pool area at the Halekulani 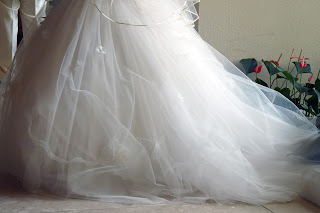 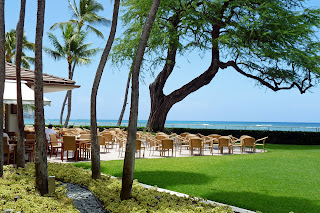 Day-time view of House Without A Key, with its century-old Kiawe tree


House Without A Key gets very busy as evening approaches, as it's considered the best place in Waikiki for cocktails. There's live Hawaiian music, and former Miss Hawaiis perform hula dancing. 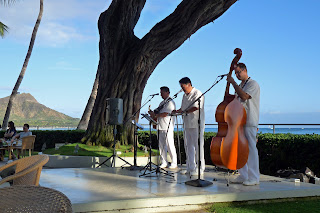 House Without A Key has entertainment during the
cocktail hour and into the evening. 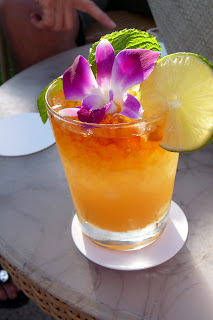 Mai Tai with an orchid—better than an umbrella drink! 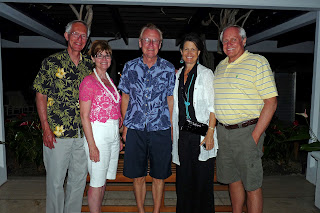 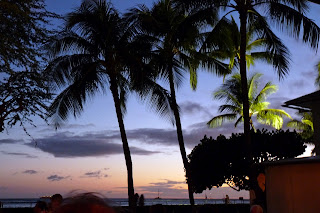 Sunset on our evening of cocktails and dinner at
House Without A Key, at the Halekulani


And so ends our tour of Waikiki.  Next time, the Big Island!
Posted by ScheckTrek Travel at 9:00 AM