"Out of Africa" Day 2: Cape Town to Stellenbosch

(This is the second post in my "Out of Africa" series.  Due to a serious foot injury, I had to cancel my plans for this trip.  However, I will present this blog as if the trip had happened according to the itinerary.)
DAY 2: Friday, November 30, 2012
I arrived yesterday and spent the day at the Mount Nelson Hotel, but the official tour started last night at the Townhouse Hotel, in Cape Town.  Today is Friday, and it was a busy, but delightful and thrilling introduction Africa.  Here’s a 360o panorama view of Cape Town and our first destination this morning, Table Mountain.

We took a cable car to the top.  Wheee!!  The view was spectacular! 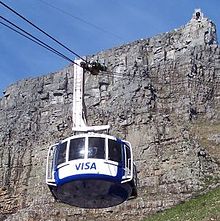 Next, a city tour of Cape Town ended up at the waterfront for a progressive-style lunch, with starters at the Greek Fisherman...

Following lunch we left Cape Town for picturesque Stellenbosch.  Stellenbosch is one of the oldest cities in South Africa and the center of the Cape Winelands.  There we toured the Van Ryn's Brandy Distillery, dating from 1845, and enjoyed some brandy tasting.  Yum! 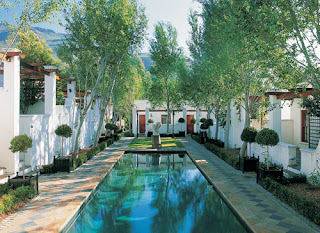 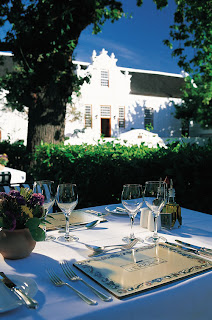 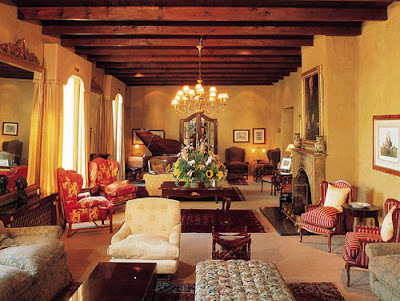 A beautiful venue for a quiet, Friday-night dinner. 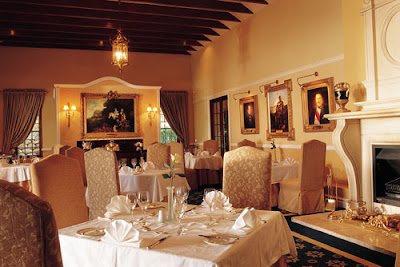 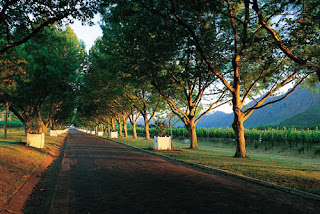 It would have been nice to have had more time to explore the property, but there’s much to see on this trip, so off we must go!
(The three Table Mountain and cable car photos are from Wikipedia.  All other photos are from their prospective official websites.)
Posted by ScheckTrek Travel at 4:49 PM 2 comments:

The term “Out of Africa” has come to have new meaning for me.  You see, right at this very moment, I was supposed to be in Africa, and but for a nasty foot injury I would now be on a two-week trip touring South Africa, Botswana, and Zimbabwe.  It was a big disappointment to have to cancel my first trip to that continent, but there’s no reason not to take the trip vicariously and to share it.
After two back-to-back red-eyes (first from Los Angeles to London, then from London to Cape Town), I would arrive at 7:00 a.m. and be whisked off to the Mount Nelson Hotel.
“I have travelled a great deal in the world ... but my favourite hotel is the Mount Nelson Hotel in Cape Town"
— Sir Laurens van der Post


To put the above quote into context, the late Sir Laurens was, among many other things, a political adviser to British heads of government and godfather of Prince William.  So in keeping with that glowing recommendation, the ScheckTrek pick for accommodations in Cape Town, South Africa, is the Mount Nelson.


I didn’t look forward to the flights, but did relish the idea of arriving at that renowned hotel—soaking in a hot tub, perhaps slipping between some luxurious sheets for a short nap, and following up with plenty of picture taking. 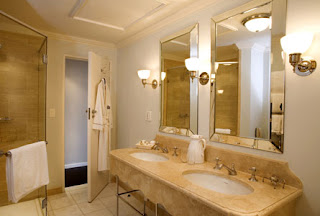 
A friend who’d lived in South Africa told me I had to have afternoon tea there—that tea at the Mount Nelson is an institution—so reservations were set for 2:30.


I wouldn’t be staying for dinner.  My visit to the Mount Nelson would be for only 8 daytime hours, just a preamble to the Ntaba tour for travel agents that I would be joining later in the afternoon.  For all the excitement that tour promised, the pace would be a demanding one: the next 11 nights would be spent in 10 different hotels.  But since I love seeing different hotels, that would be a treat for me!
More on that next time.
Posted by ScheckTrek Travel at 3:39 PM 3 comments: