This was not the first time I’d flown first class.  In my earlier years when I was an interior designer, five other Los Angeles designers and I had been invited to tour Karastan’s rug factories in North Carolina.  It’s almost hard to imagine in today's economic climate, but they flew us there first class.

And then there was the time I was racing home to Tennessee – hoping to make it soon enough to see my father one last time – and the first flight was too late to make the connection.  The airline got me on the next one, but the only available seat was in first class.  How lucky was that?  (The other good news was that it didn’t end up being the last time I saw him.)

It was that second time flying first class that impressed me more.  Maybe it’s because on the earlier occasions, we weren’t accustomed to the sardine section’s being quite so jam-packed as it came to be in later years.  Maybe it’s because, traveling alone the second time – and with a certain amount of emotional duress – I was more aware of the niceties: a glass of champagne as I was seated, a rose in the first-class restroom.

It’s not that I was late-late in reserving frequent-flyer award travel for my business trip/family visit.  It’s just that it was late enough that there were no more 12,500-mile-per-leg economy-class seats available for free.  And free is good.  I really like free.  So my choices were to trade in 25,000 miles per leg for “anytime” economy-class travel, or choose from a more limited selection of times, but fly first class.  Who among us would say, "Give me coach!  I prefer the cozy closeness of it all.  Really love the way my knees feel when they're embedded into the seat back in front of me"?  No surprise here, but I went with first class.

We got to Los Angeles International Airport only to see a huge long line snaking its way up to check-in.  But that wasn’t for us.  We got to walk past them all to Premium/First Class check-in, where we actually had a choice of agents we could have walked up to, all with no customers.  “Couldn’t they have spread out some of these agents?” I asked my husband.  That part was quick, quick, quick.

I still had to wait in line for TSA screening (though a much shorter one than the pleb line was).  So there I stood, feeling like an imposter.  Surrounding me were the women with perfect hair colors – you know, the kind of blonde that you know had to cost a fortune.  And then there was the man whose hair was also notable, mostly due to its length.  It’s not that he was mean-looking – just a little scruffy, sort of like the type you wouldn’t want to run into in a dark alley.  Except that he was flying first class and carrying a guitar case.  (Maybe I should have asked for his autograph, just in case he’s famous?)

I acquiesced to the TSA screening, only to have to be patted down anyway because there were rhinestones on my top.  Oh, well.  I’m telling myself the pat-down would have been more intrusive had I not offered my body for the viewing pleasure of someone in a “remote location.”

Turns out the flight times with first class offerings had been great, so I paid little attention to the equipment.  Flying Los Angeles to Houston, Texas, what else would we have but BIG?

“What do you mean, American Eagle?”

Followed by, “Why can’t I see a sign for Gate 44J?”  Ah, there it is.  Take the escalator down.  “Why did I just buy this venti cappuccino?  Please don’t have an earthquake while I’m trying to manage a carry-on, my camera bag, and a hot drink on an escalator, all without falling on the lady I just let go ahead of me.”  A bus took us to a remote waiting room.  Not feeling very first class in all of this.

On boarding the plane my carry-on was tagged and I was informed that I could pick it up right after the flight.  I was happy I'd thrown in the heavy-duty bag from our Oceania cruise, and I transferred my laptop and a few essentials into that to carry onto the plane. 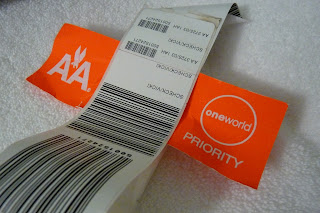 First-class on a puddle-jumper jet.  You know those big cushy seats you pass through all those times when you aren’t flying first-class – those soft Italian leather ones with New Zealand sheepskin?  (Okay, maybe they aren’t Italian or New Zealand products, but they could fool me.)  We’ve all seen them as we’ve headed back to our seats in the cattle-car section, and we’ve all wished we could be some of the lucky few.  “How rested I would be if my seat reclined and had those footrests.” Forget it, they aren’t on a puddle-jumper!

Still, first class does come with its creature comforts.  You barely take your seat before a fight attendant asks if you’d like something to drink.  “A glass of champagne, please.”  I have to say, I was disappointed that it was a plastic glass, but still…  Before take-off, however, she returned to retrieve it (barely touched).

After take-off she returned for beverage selection.  “I’m not counting that first one,” I said.  This time it came in a real champagne glass and accompanied by mixed nuts (with nary a peanut in the piled-high dish).  “Will a meal be served on this flight?”  Yes, there was a choice of attractive options, each served on a tablecloth- (cloth napkin-) covered tray.  For the poor souls back in steerage, it was BYOF (Bring/Buy Your Own Food) – and no cloth napkin.  All in all, I did feel fairly well spoiled.  I could get used to this. 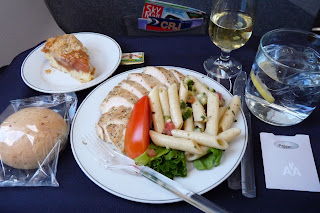 “Another glass of champagne, please.”
Posted by ScheckTrek Travel at 9:09 PM 2 comments: